So what’s a meme? Evolutionary biologist Richard Dawkins, who coined the term, defined a meme as a bit of culture that gets propagated. It’s basically culture’s version of what genes are to biology. Conceptually, then, anything that spreads and evolves widely in a culture is a meme; in the 60s, the peace sign was a meme; fashion trends are memes; popular quotes from movies are memes.

When most people think of memes, a specific kind of captioned image, like the well-known LOLcats and their canine counterparts, the Fail Dog, come to mind. In common Internet parlance, “meme” refers to those viral images and videos that spread like wildfire through social media spaces. Psychologist Susan Blackmore calls these memes that are spread through the use of technology temes. 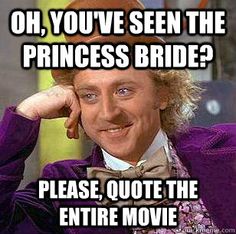 There are hundreds of different image-based memes floating around, and they seem at first glance to be quite simple. These memes actually convey a lot of information in a very compressed form, and often require lots of inference to understand. Someone who had seen neither Willy Wonka and the Chocolate Factory nor The Princess Bride would likely be baffled by a meme like the meme pictured here.

What’s interesting to us about these kinds of memes is that they have become a kind of shorthand for certain ideas, while also having really specific genre requirements. For instance, the Gene Wilder image above, without any text added, could be interpreted in any number of ways. He looks happy enough. But within the meme-making community of practice, this specific image of Willy Wonka has been given only two possible emotional reads: either condescending or creepy. It’s condescending Wonka in the meme above, obviously. You can investigate, if you want, the creepy side of the Wonka meme, but realize as you explore that not all memes are going to be school-appropriate, and knowing your meme is always a good idea before sharing it in class.

If you’re new to memes, the Meme Generator website (and mobile apps for iOS and Android, though I have not used either of them) is a good place to start. Most of the popular image-based memes are available as blank templates. If you’re looking for inspiration, consider making some memes about campus, classes you are taking, special events taking place recently, or one of the “What I really do” memes). Or maybe make some memes about the myths people have about students. If you want to get out and about, you might try contributing to one of the Photo Fad memes (think planking, owling, or Tebowing).

As you delve into the world of memes, think about how you are using the modes of communication as well as about the rhetorical situation and design choices involved. Think also about how you publish your memes. After all, memes are made to replicate and spread. How might we, as writers, leverage the power of the meme to spread a message we find important?

Want to know more? Check out some of these resources:

This page was adapted from a #CLMOOC Make Cycle page written by Kim Jaxon, Jarret Krone, and Peter Kittle, from the Northern California Writing Project.

This Is an Archived Site

This is an archived website that connects to my teaching portfolio. The site is not maintained, beyond updating the site software. If you have any questions, email me.